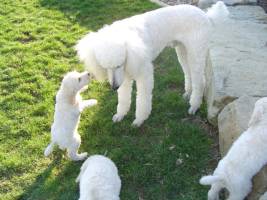 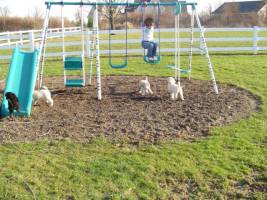 So you've done your research and decided on a Standard Poodle.  You've asked many questions and seen how the puppies are raised, you've met the breeder and the parents of the puppies and you're ready to make your choice. Your pick should be based on a matching personality with the puppy in question.  How does the puppy react to you and your family, kids? The sex of the puppy should be your last consideration.  Why?  Because most people have a huge misconception on sexes and personalities. Most feel a female is a sweet, loving dog who is a caretaker of puppies and children.  Well, that's not always so--they aren't called bit** for nothing! Female dogs are nice; I like my girls and I'm pretty sure they like me.  They come to me and get attention, and then they move away and are content to lie on the other side of the room.  Perhaps this matches your personality perfectly--maybe you want a dog that isn't overly affectionate.  Girls take training seriously, and most are very good at obedience.  Females can be alpha dogs just as easily as a male can.  Spayed females, of course, make a much better family pet than unspayed females do.  Boys tend to get a bad rap because, in your mind, you remember the neighbor's disgusting unaltered male dog hiking his leg on every bush in the neighborhood and doing nasty "boy" things.  Male dogs that are intended to be family pets NEED to be neutered at an early age (5 months old).  When you do YOUR part, you have an absolutely wonderful family member. They usually squat to piddle, never develop any type of nasty habit and are extremely loving dogs.  Where your girls will get their attention and go lie down, a boy will stay near you.  He likes to be with his person, he likes to be loved on; he is "devoted" to you. Yes, he takes his training seriously.  But then he likes to have FUN, he likes to play in the yard--he doesn't like to take life too seriously all the time!  So before you choose a dog based on its sex only, consider the other elements.  Are you the type of person who likes an independent dog, or one who prefers a dog that worships the ground you walk on? Ofcourse there is the exception to every rule and the amount of time you spend with your puppy will make a huge difference in his or her personality. My suggestion is to spend time with your potential choice at the breeder's, but don't ignore a potential 'perfect match' for you because it may not be the sex you originally sought!

"OKF's A Treasure Sent From Heaven"

Several years ago I owned a gift store in our small hometown. It was a quiet place and not much happened there so I felt fairly safe. Trevor went to work with me just about everyday, he and I were inseparable and I enjoyed his company while I worked. His favorite spot was on his bed behind the counter, he was a big dog but my customers rarely noticed him sleeping there and when they did he didnt bother to lift his head to even acknowledge their existence. To know Trevor was to love Trevor, he didnt have a mean bone in his body, he tolerated everything from small children to cats and puppies climbing all over him, he was extremely mellow and he sure loved his human mommy.

One Friday evening I was working late in the store, our location was not the best in town but the rent was fair and the building was attractive, it was located next to a bar and on the weekends the crowd did get to be a bit much coming and going, I stayed open because, well to be honest, people who have been drinking tend to spend large amounts of money! This Friday was fairly quiet though and I was thinking of closing up and heading home, Trevor was sleeping quietly at his post behind the counter, it was late fall and dark outside, a man walked into the store who I had never seen before, being a small town I thought I had met most of my customers at least once before, he was dressed a little rough, almost like he may be a bit hard up, I said hello and didnt pay much attention to him as he made his way around the store, he seemed to linger not really shopping, the way the store was set up you could go to the card department and basically come up behind the cashier, as he lingered near the cards I started to get nervous, I had no where to go, there were two exits but I was trapped behind the counter, I tried not to show my nervousness as he slowly made his way toward the back of the counter, he just kept starring at me as I started to fidget with paperwork, I asked him if there was something I could help him with and he didnt answer he just starred blankly at me. At this point my big boy Trevor apparently sensed something was not right and he arose from his bed and walked to the opening of the counter, he looked at this strange man, his tail was not wagging, he gave a soft low growl, which surprised even me-I didnt know he even knew how to growl! With that the man made a bee line for the door and I locked the door behind him and gave my big boy a huge hug and a kiss, who knows what might have happened if Trevor hadnt been there that night, he never growled again at anyone or anything. I always tell people that these are not just dogs-if they act out of character then pay attention because they know..they just know.

When I decided to add another female to our house of poodles I knew exactly where I wanted to go for it and that was Trevors breeder, she didnt have anything at the time but directed me to someone who had her bloodlines in California, I was specifically looking for an apricot female and they happened to have one that fit the bill, after a thorough examine of her photos and pedigree I sent them the payment, she was paid in full before she turned 8 weeks old and I anxiously awaited for them to ship her, the days went by and no puppy, I finally put my foot down and demanded my little girl be sent to me as she was now 12 weeks old! Apparently they had gotten attached to her and were dragging their feet to send her. When she arrived she was more beautiful than her pictures, I was very pleased with her and named her Sierra, but her feelings toward me were not the same, she could care less about me, it was clear she had grown attached to the breeder also, this was hard for me as I have a deep love and attachment to each of my dogs, I tried everything, she seemed to like me ok but she just didnt love me. She would just give me this look from her soft brown eyes that said cmon you have got to be kidding me, your not my master and I wont let you be!

I make it a point to spend special time with each of my dogs one on one so they all feel special, they go to the bank with me etc., I had some stock left over from my gift store I owned and decided to do a 3 day festival at our local fairgrounds, pets were allowed and it was Sierras turn to go, she was now 3 yrs old and still had the same attitude towards me, the first two days of the show went great, she was very well behaved and everyone commented on what a beautiful girl she was, Sierra is very outgoing and greets everyone as if they were her best friend. Jim and I had been dating about 4 months and every morning and evening before and after the show hours we took Sierra out to a big grassy field to let her run and do her business, on the last morning of the show I wanted to organize the trailer so that packing up that afternoon would go smoothly so I stayed behind and Jim and Sierra went to the grassy field, as usual he turned her loose to run, but on this day she sniffed around and all of a sudden she took off like a sprinter headed for the finish line!  She flew like a shot back thru the gates of the fairgrounds with Jim hot on her heels! He was scared to death that he had lost my dog-but she knew where she was going - that was until she got to the crossroads path in the middle of the fairgrounds and apparently couldnt remember which way to turn, he caught up with her there-out of breath of course. The dog who never gave me any indication that she cared for me in any way was looking for me! She was so happy to see me when they got back to the tent she jumped right up and gave me a big dog hug! Things between her and I changed after that day, I cant say she is the most loving dog towards me that I have ever had but she is much more attached to me now, she follows me everywhere and snuggles in for affection every chance she gets. I guess maybe she didnt want ME to know that she did indeed love me but when she thought she would never see me again it changed her way of thinking!